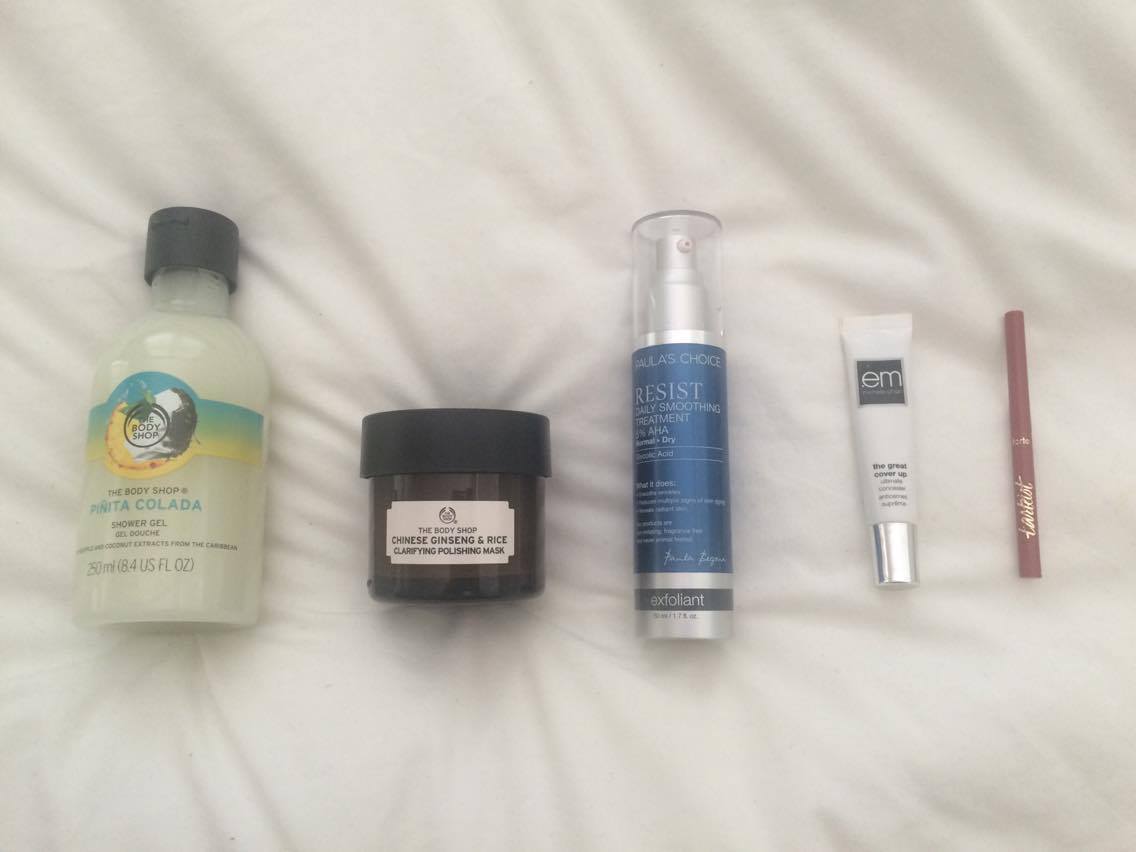 Other than lipsticks, I haven’t been trying out a whole lot of new things recently. I’ve been (drum roll) pretty sick, blah blah family problems, blah blah studying and working, and also just really trying to make the most out of what I already have rather than buying more stuff. Again, that’s with the exception of lipsticks. I’ve got a few things to talk about lipstick wise (Urban Decay Vice lipsticks! New Pretty Zombie Cosmetics Liquid lipsticks that I bought when I was heavily out of it on painkillers in hospital!).

I also could very easily have done a monthly round up of Body Shop products. As I’ve stated numerous times, I’m in retail, I work there, and it’s nice working somewhere that you actually like and use the products of. I tend to only talk about things if they’re huge hits or ridiculous fails (which does happen), and I tend to sample almost everything so my monthly empties tend to sum up most of the latest launches, but while I try not to overload these posts with that shit, there are actually two things I’m currently genuinely excited about. Like, would have bought full price as a normal customer excited. Like, one of them I bought three backups of excited. There are also some other things here that I’ve recently acquired, whether by purchasing them or by them just somehow ending up in my lap, but they felt worthy of discussion. Let’s dive in.

The Body Shop Piñita Colada Shower Gel – I put the shower gel here because I am a noted shower gel enthusiast and also because, as I mentioned, I bought three of these bad boys and I’m still not sure I have enough (three mojito shower gels didn’t feel like enough). Really, though, this is here for the scent. I also picked up the body butter, and I had zero intention of doing that. None. Do you know how many body butters you acquire when you work at The Body Shop? It’s a genuine epidemic. I had every plan on resisting this one in spite of the smell, but when I felt the texture – lightweight and springy, almost velvety, a la the Japanese Camellia Cream, I was sold. The shower gels were a no brainer. My mother loves coconut and I love pineapple, and we’re both thrilled that it’s not too heavy on the coconut so as to be cloying. Plus I’ve never had issues with TBS shower gels drying out my skin, and I’m not just saying that – Lush shower creams are my worst enemy, for example. Just check out the smell. Pop into a store and slather some on while it’s here. Grab a sample. It really is the perfect summery smell, not too heavy, not too sweet. I almost prefer it to Virgin Mojito. Almost.

The Body Shop Chinese Ginseng and Rice Clarifying Polishing Face Mask – I reviewed most of the new mask range back in my July empties, and I honestly wasn’t a huge fan of any of them. There was a lot of like-but-not-love going on (and in the case of the Himalayan Charcoal, which is coincidentally the most popular mask of the range in the Australian market, downright NOPE for me). I warmed up to the Acai berry one and I thought I might start to convince myself to gain enthusiasm for it, and then I finally tried the Ginseng and Rice mask. The next day, no kidding, my skin looked so damn good. I thought it might be a fluke, tried it again, and it turns out this mask is just the perfect match for my skin. It’s a clay mask, so it’s good for my blemishes, but it’s not a harsh stripping clay like the Himalayan Charcoal – it’s got rosehip oil and it dries almost soft, so you get the deep cleanse feeling but not to the same extent. It’s quite intense in its exfoliation, but with gentle little granules, and that’s lovely to someone like me who can’t handle our most popular exfoliation products and found two of the other masks to border on too exfoliating (acai and charcoal). I’m delicate. It’s also got a nice low but present level of salicylic acid and is overall just damn nice. It is permanent, so even though it’s sold out almost everywhere, it will be back eventually.

Paula’s Choice Resist Daily Smoothing Treatment with 5% AHA – And over to something I have slightly less glowing thoughts about, sadly.   I have had great success with and really do enjoy the 2% BHA liquid, and a lot of people spoke about alternating their AHA and BHAs, so on a whim I thought I’d plunge in to the full size and try this out. Maybe I just tried this at the wrong time for my skin, but the three week period I was using this  with no other new additions was some of the downright worst my skin has been in a long time, just really broken out which is not usually how it goes in winter weather. I might give this a go at a later stage but I’m super wary of it.

em. Cosmetics The Great Cover Up Concealer in Light Neutral/Cool – I got this in my last Bellabox, but I thought I’d throw it in here to update you on how it actually works and my thoughts on it as a concealer. I’m notoriously quite fussy with concealers, and incredibly nonplussed by most of the major players (Mac Prolongwear? Eh. Estee Lauder Doublewear? Eh. Maybelline FitMe? Eh. Nars RCC? EH. The list is lengthy). I am surprised by how much I am enjoying this, especially given my hesitance towards em. Cosmetics as a brand. It’s definitely a creamier consistency, and reminds me of a higher coverage version of something like the Maybelline Superstay Better Skin, or perhaps an easier to blend version of the It Cosmetics Bye Bye Undereye. It isn’t quite up to the job with severe raised blemishes which require a more tacky, solid concealer a la Laura Mercier Secret Camouflage or NYX’s Full Coverage Concealer in the little pot, but other than that it works well on blemishes, spot concealing, redness and under the eyes if you aren’t going for the instagram concealer highlight. The shade is nearly ideal for me, and will be perfect in summer – right now it’s a tiny smidgen too dark – and I appreciate the inclusion of undertones. I’ll definitely continue to use this, and it’s a product I would consider keeping in my regular rotation were it not so difficult to track down (perhaps I could cash in some of my hundreds of bellabox points).

Tarte Tarteist Lip Crayon in Latergram (deluxe sample) – I feel like every review of this range of liquid lipsticks and matching liners briefly mentions that they’re setting aside the cringe inducing names and you know what, let’s actually all take a few moments to fully embrace the cringe. Imagine, if you will, a slideshow with the names appearing on screen. Yaassss. Manbun. Bae. Twerk. On Fleek. I’m standing next to the screen. I’m staring at you, shaking my head. A single tear rolls down my cheek. We’re in this together. Right, so Latergram is a pretty classic mauve with some dusty, brick type tones to it. It’s pretty basic and I would swatch it but my lips are covered in Pretty Zombie Cosmetics Transylvania and that shit is not going anywhere – and this is not a swatch post. I thought “hey, what could go wrong? It’s a lip liner in a pretty colour!” Yikes. These lip crayons, while being self sharpening – nice – are so damn dry and draggy on the lips. Even my traditional shove-it-in-the-bra-for-five-minutes doesn’t resolve the dragging problem, and believe me, my lips are in impeccable shape. I thought my NYX retractable liners took a bit of work, but this is next level. Put simply, these are not worth it. The matte lip paints themselves are tolerable if you’re a fan of mousse formulas, but unless they reformulate these liners, there are so much better options available at so much cheaper prices (my favourites are NYX for colour range, Essence for price, The Body Shop for comfort/creaminess, Urban Decay for something that feels fancier).

Five things! Hope those were worthwhile thoughts. Share yours! Tell me about other things! I’ll be commencing work on one of those lipstick posts, but which? Who knows. I’m also going to America just before Christmas, land of reasonably priced makeup and wonderful holiday releases, so I need to start making a list and checking it several times. Variety is the spice of life.

Twenty-something Aussie called Sara. Loves writing, lipstick, and horror movies. The third one isn't really relevant, but the others might be.